Primer on public alerts for astronomers from the LIGO and Virgo gravitational-wave observatories.

The multi-resolution format has been introduced as a forward-looking solution to deal with computational challenges related to highly accurate localizations. We are getting better at pinpointing gravitational-wave sources as more detectors come online and existing detectors become more sensitive. Unfortunately, as position accuracy improves, the size of the standard HEALPix sky maps will blow up. This started being a minor inconvenience in O2 with GW170817. It will get slowly worse as we approach design sensitivity. It’s already a major pain if you are studying future detector networks with simulations.

It is worth reviewing why LIGO/Virgo has adopted HEALPix rather than a more commonplace image format for sky maps in the first place. Gravitational-wave localizations are distinguished from many other kinds of astronomical image data by the following features:

As a consequence of these features, it is difficult to pick a good partial-sky projection (e.g. gnomonic, orthographic) in the general case. Traditional all-sky projections have wild variations in pixel size (e.g. plate carée) or shape (e.g. Mollweide, Aitoff) and as well as seams at the projection boundaries. HEALPix was already well-established for specialized uses in astronomy that cannot tolerate such projection artifacts (e.g. cosmic microwave background data sets and full-sky mosaics from optical surveys).

Fortunately, the increased resolution will come at little to no computational cost for actually producing localizations because most LIGO/Virgo parameter estimation analyses use a simple multi-resolution adaptive mesh refinement scheme that limits them to sampling the sky at only about 20k points.

An illustration of the adaptive mesh refinement scheme, reproduced from 1.¶

When these multi-resolution meshes are flattened to a single HEALPix resolution, all but the finest nodes in the mesh become long sequences of repeated pixel values. High resolution also does not cost much in terms of disk space because gzip compression can store the long runs of repeated pixel values efficiently. The diagram below illustrates a multi-resolution structure that is fairly typical of gravitational-wave localizations from O1 and O2.

An example multi-resolution mesh from a typical two-detector (LHO and LLO) localization produced with BAYESTAR. Reproduced from 1. The scale bar at bottom right has a length of 10°.¶

However, the resolution does come at a significant cost in the time it takes to decompress and read the FITS files (already up to tens of seconds for GW170817) and in terms of memory (up to several gigabytes). The time and memory will worsen as localization accuracy improves.

The multi-resolution format is immune to these issues because it is a direct representation of the adaptive mesh produced by the LIGO/Virgo localization algorithms.

Recall from before that three pieces of information are required to specify a HEALPix tile: nside to specify the resolution, ipix to identify a sky position at that resolution, and the indexing scheme. 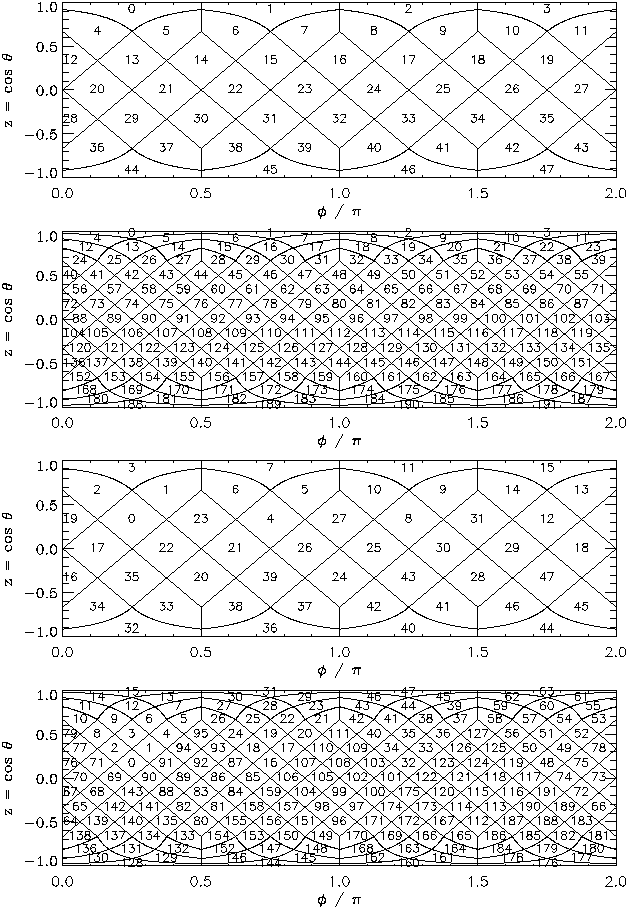 There is a third HEALPix indexing scheme called UNIQ. The UNIQ indexing scheme is special because it encodes both the resolution and the sky position in a single integer. It assigns a single unique integer to every HEALPix tile at every resolution. If ipix is the pixel index in the NESTED ordering, then the unique pixel index uniq is:

The FITS format for LIGO/Virgo multi-resolution sky maps uses the UNIQ indexing scheme and is a superset of the FITS serialization for Multi-Order Coverage (MOC) maps specified by IVOA 4 as part of the Hierarchical Progressive Survey (HiPS) capability 3, notably used by Aladin for storing and display all-sky image mosaics.

Let’s look at the FITS header:

This should look very similar to the FITS header for the standard HEALPix file from the previous section. The key differences are:

Now let’s go through some of the same common HEALPix operations from the previous section, but using the multi-resolution format. Instead of Healpy, we will use astropy-healpix because it has basic support for the UNIQ indexing scheme.

First, we need the following imports:

Next, let’s read the sky map. Instead of a special-purpose HEALPix method, we just read the FITS file into an Astropy table using Astropy’s unified file read/write interface:

Next, let’s find the highest probability density sky position. This is a three-step process.

Probability Density at a Known Position¶

Now let’s look up the probability density at a known sky position. In this case, let’s use the position of NGC 4993:

The following brute force method of looking up a pixel by sky position has a complexity of \(O(N)\), where \(N\) is the number of multi-resolution pixels.